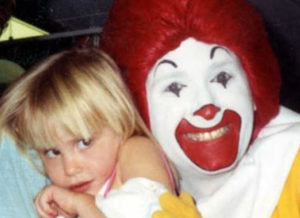 This Ronald McDonald is convinced that he is giving this little girl the thrill of her life.  But, a quick read of her face tells another story.   One reason Ronald doesn’t see it, is because he is not looking at her.  Another reason could be that he is so involved in his job, that he’s not really trying to connect with her.

Yet another reason he doesn’t see it may be that he cannot read the fear in her face.  He may not be aware that he’s crossed a boundary.  That he did not respect the emotional signals the girl put out.  He thinks to himself, “Everyone loves Ronald McDonald?”

When a couple is arguing intensely, there are strong emotions being displayed.  Anger.  Fear.  Sadness.  Surprise.  Numbness.  Indifference & Withdrawal.  Even if fear is being displayed by a partner, some will persist in not acknowledging it.  Or, will insist that the fear is wrong.  Rather than that the boundary crossing behavior, which caused the fear, was wrong.  What if this little girl punched Ronald in the face?  Is that an understandable response to feeling disrespected?  Perhaps the girl is misreading the Ronald’s emotions as poorly as he is at reading her feelings.

I have an illustration (which can be downloaded) that helps some people better understand that feelings of hurt, anger, fear, sadness, or withdrawal can get mixed up and misunderstood.  Here it is:

Aggression Can Be A Mask For Fear, Pain, or Powerlessness

Go HERE to download a larger version of this graphic.

The trick is to be humble enough to ‘NOT KNOW’ what others are feeling.  It’s respectful to ask someone what feelings he or she is experiencing.  Sometimes, what looks like anger is really shame.  Or, withdrawal turns out to be hurt.  When there is no confirmation from the one showing the emotion, then there is more room for misunderstanding.

So, ASK your partner what he or she is thinking and feeling.  Asking the question,

What does that make you think?

is a great question!  Just don’t immediately argue with what is said.  Remember, it’s O.K. if your partner is upset with you.  When you argue or withdraw whenever your partner is upset, then there is no normal mechanism to communicate and grow and thrive as a couple.  One partner thinks that the other is too angry and critical too often.  But, the source of that partner’s frustration may indeed be that the first partner NEVER accepts or acknowledges any comments that are interpreted as critical.  It’s pretty understandably frustrating to not be allowed to express your needs, feelings or thoughts to a partner.

Next Los Angeles Workshops at RealHope.com