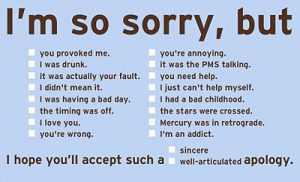 Why Some Apologies Don’t Work

Catch yourself the moment you start thinking about saying the word, ‘BUT…’  after saying, “I’m sorry.”   If you say anything after apologizing starting with the word ‘but…’ you might as well sh*t your pants, because you’ve now made it worse.  My apologies to those offended by asterisks.  I really want you to make a bad association with saying, “I’m sorry, but… ”

It’s a reflex for many people to explain why they did something that hurt someone.  What follows the ‘but’ is either blaming, an excuse, or some other reason that eliminates personal responsibility for having hurt another person.  It reveals an inability to be seen in any way as responsible, wrong, bad, mean, or inappropriate.  I don’t know what’s happened in these people’s childhoods, but my guess is that mistakes were punished very severely.  Some people who cannot simply apologize are modeling what one, or both, parents did with each other.  How did your parents respond when someone in the family said, “Ouch!”?

Make sure that when you say you are sorry that you shut up and zip your lip after saying the word.  Remember ‘No BUTS!’  Especially, if you’ve not yet stated what part you played in a conflict.  See the post “What’s my part in this?”

To apologize does not always mean that you are responsible, or that you meant to harm your partner.  If you want your partner to listen to your experience of a conflict, then start with saying you’re sorry.  And, don’t justify, rationalize, minimize, or deny your offering of empathy by saying, ‘but…’    You don’t want to be doing an extra load of laundry now do you?